21 There was a man from Cyrene named Simon walking into the city from the fields. He was the father of Alexander and Rufus. The soldiers forced him to carry Jesus’ cross. 22 They led Jesus to the place called Golgotha. (Golgotha means “The Place of the Skull.”) 23 There they gave him some wine mixed with myrrh, but he refused to drink it. 24 The soldiers nailed Jesus to a cross. Then they divided his clothes among themselves, throwing dice to see who would get what.

25 It was nine o’clock in the morning when they nailed Jesus to the cross. 26 There was a sign with the charge against him written on it. It said, “ the king of the jews.” 27 They also nailed two criminals to crosses beside Jesus—one on the right and the other on the left. 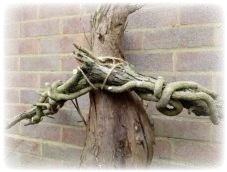 No artistically designed cross for Jesus, just an executing cross, a public hanging and death bringing cross. But at this cross the serpent, the evil one who tempted those tender naïve souls in the garden to eat of fruit from the wrong tree is defeated. The serpent’s action upon and within our lives loses its power in the light of the gospel, the forgiveness of the cross of Jesus, the love of the waiting Father. It is as if a brick wall has been built between us and our sin and shame on this day never to be broken down, climbed over or dismantled – our sin is removed and held off of our lives so that we might go free…. thank you for the cross Lord Jesus